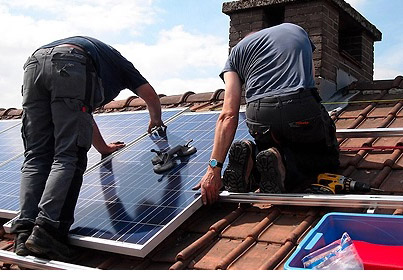 The government is under pressure to extend the green homes grant scheme beyond March 2022 after a committee of MPs described current progress as moving at a snail's pace.

Business, energy and industrial strategy minister Lord Callanan admitted only 20,000 vouchers have been handed out since its launch last summer. The slow take-up led the government to extend the original March 2021 deadline by a year.

Environmental Audit Committee chairman Philip Dunne said: "The principle of the scheme should be commended. It is a timely initiative not only to boost energy efficiency of homes - which is urgently needed to stem carbon emissions - but to address our growing unemployment crisis triggered by the pandemic. But unless overhauled and further extended, this scheme will fail to deliver its ambition."

Philip Dunne was speaking ahead of the latest Environmental Audit Committee report which also called the Green Homes Grant scheme a 'botched disaster'.

MPs on the Committee estimate it would take another ten years for the scheme to hit its target of 600,000 refurbished homes.

Only 1,300 companies had registered with TrustMark, the government's approved licensers, at mid-february, which the Committee says is why so few consumers have been able to do green refurbishments.

Skilling up is key to making green retrofits work

National Federation of Building housing and policy head, Rico Wojtulewicz, said his organisation agreed the deadline should be extended for the green grants. However, he warned without investing in training the industry wouldn't be able to meet demand. "Capacity remains a major barrier and we therefore must do much more to ensure apprentice trainers and employers have a pipeline of work so they feel comfortable taking new learners on and that the public better understands the benefits of the scheme and how long retrofitting can take.

"An energy efficiency or retrofitting passport for each home would be a great starting point to achieve this," added Mr Wojtulewicz.

Master brokers Hank Zarihs Associates said property development lenders were keen to offer funding for builders who wanted to expand into this sector. The Environmental Audit Committee has highlighted that more accredited engineers would be needed if the government is to meet its target of 600,000 heat pumps installed a year by 2028.

The Committee pointed out the government's £6.9 million skills competition in September was just seven months ahead of the Green Home Grant March deadline of 2022.

It said the competition was unlikely to have a significant impact on the availability of skilled engineers.

The Institute for Public Policy Research suggested 250,000 jobs could be created in energy efficiency by 2030 but warned that a net zero and just transition delivery plan would be needed.

The £3 billion green homes grant scheme offers homeowners and residential landlords two thirds of the cost of up to £5000, rising up to £10,000 for low income families, in home energy improvements. The scheme was due to have finished at the end of March 2021 but the government extended the deadline to the end of March 2022.

Picture: Solar is included in the Green Deal but the voucher scheme is so complicated that few will be installed. Window and doors are also included but again under uninspiring conditions.

The Green Homes Grant voucher plan has been extended to March 2022 - but the Environment Audit Committee has said the scheme is 'woefully...

Green Grant Could Cripple Industry It Is Supposed To Save

The Green Homes Grant plan has gone from being applauded to slated as jobs could be put on hold while homeowners wait for the scheme details to be released...