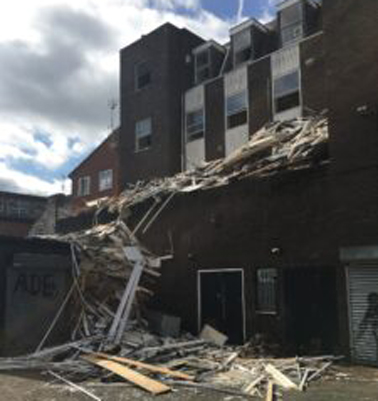 Pearsons Glass has been convicted after a roofer was fatally injured when he fell six metres at a property in Liverpool. Meanwhile, a job in Manchester has landed a firm in bother for not bothering about asbestos.

Liverpool Crown Court heard how on 22 May 2017, the roofer was completing snagging work on a replacement roof. The worker had accessed a part of the old roof made of fragile asbestos cement sheets, which gave way. He fell through the sheets to the ground below sustaining fatal injuries.

An investigation by the Health and Safety Executive found that the building occupier failed to take reasonably practicable measures to reduce the risk to those working on the roof.

Owners of the building, Pearsons Glass, pleaded guilty to breaching the Health and Safety at Work etc. Act 1974, sections 3. The company was fined £80,000 and ordered to pay costs of £6,656.

Speaking after the hearing, HSE inspector Andrew McGrory said: “Businesses have a responsibility to ensure that the contractor they select to undertake any construction work devise safe methods of doing so, which should include providing the necessary information to their workers and ensuring that they are adequately supervised.”

The prosecution of the roofing contractor is ongoing.

A construction company and a property management company have both been fined after failing to manage asbestos safely during a refurbishment of a former office block in Stockport.

Manchester Magistrates’ Court heard how Samer Constructions Limited had been contracted by Swift Property Management MCR Ltd to refurbish the property in Hazel Grove, Stockport. Materials containing asbestos along with general waste had been discarded from the property, on and before 2 August 2018 and were spread across the roof of a one storey part of the block. Some of the materials had also fallen onto a car park area below that was not segregated from passing members of the public.

An investigation by the HSE found that an asbestos survey carried out on 31 May 2018 identified the presence of asbestos containing materials (ACMs) including licensed ACMs but this had not been passed to Samer Constructions Ltd prior to work being carried out. Swift Property Management MCR Ltd failed in its duty to pass the survey onto the contractor prior to work commencing. Samer Constructions Limited failed in its duty to identify whether a survey had been undertaken and went ahead with the work in a reckless manner resulting in two employees being exposed to asbestos fibres.

Swift Property Management pleaded guilty to breaching the Health and Safety at Work Act. The company was fined £25,000 and ordered to pay costs of £3,428.

Speaking after the hearing, HSE Inspector Phil Redman said: “These risks could so easily have been avoided by acting on the findings of the asbestos survey and carrying out correct control measures and safe working practices.”

Picture: The block in Stockport that landed two companies in court for unsafe removal of asbestos.

NARM, the National Association of Rooflight Manufacturers, has published technical guidance on all aspects of specification, with a strong focus on...

The Health and Safety Executive has released its annual figures for the number of work-related fatalities in 2019/20. The figures came out at the...

The Safety Bill - Get Prepared

The government’s Building Safety Bill and its 53 recommendations to drive cultural change and safety improvements within the industry, has been...

Harnessing The Power Of Harnesses

Two of Exowear’s BackX harnesses have been purchased by HAKI to relieve and reduce fatigue and wear in the lumbar spine. On an hourly basis,...

Finger Points To Drugs and Alcohol

Crown Roofing & Cladding has kicked off fingerprint drug and alcohol testing at one of its European sites to promote employee health, safety and...

Tuesday 23 March was the anniversary of the first Covid lockdown. At midday, the nation held one minutes silence to remember the dead and the devastation...

Is This The Most Dangerous Ladder In The UK?

The Test & Research Centre has helped block another shipment of dangerous ladders from hitting UK shelves in a joint operation with Trading...

Lock and hardware firm UAP has invested in a set of defibrillators for its two premises. Both are registered so they can be found by the public in an...