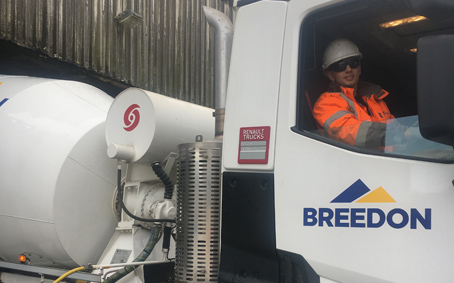 Employees who might just fancy a change or are forced to because of redundancy can do so with an apprenticeship at any age. Employers looking for life experience as they can teach the skills can also take on an older head via the apprenticeship route.

Ahead of National Apprenticeship Week, Seetec looked at three apprentices who chose to take the leap and change careers to be part of the logistics industry, which soon became one of the key industries that kept the cogs running during the pandemic.

The 14th annual National Apprenticeship Week (NAW) ran from 8 February - 14 February with the theme for this year being ’build the future’, which aims to shine a light on the work of apprentices and their employers.

The three apprentices who managed to swap their old jobs for a career on the open road thanks to Breedon’s Large Goods Vehicle (LGV) driver apprenticeship programme, are a part of a large number of apprentices that successfully passed their apprenticeships last year, despite the challenges of the pandemic.

Breedon, a leading construction materials group in Great Britain and Ireland with 3,500 employees, including 400 company drivers, turned to Seetec Outsource to support their 40 apprentices who were looking to change careers and enrolled on the level 2 Large Goods Vehicle (LGV) Driver Apprenticeship.

Three Breedon apprentices have shown the opportunities available to people pursuing a career in the logistics sector. Nigel Bennett, 42, a graduated apprentice at Leaton Quarry in Telford, is proof there is no age limit to those wanting to change careers. Bennett was looking for a change from his job of 15 years as a manager in a special needs children’s home.  Bennett explained: “I was looking for something where I could start completely from scratch because I didn’t want to stay in the industry I was in – the career change offered me a chance to learn something new.

“I was a manager in a special needs children’s home. When I turned 40, I realised I couldn’t do that for the rest of my life, I suppose it was a bit of a midlife crisis – I just fancied a change.”

Bennett, who has now successfully completed his LGV apprenticeship and is employed full time as a concrete mixer truck driver, encourages others to make a change, no matter their age: “Just do it. It’s the best thing I’ve done.”

Office for the road

Another apprentice who has since graduated is Robbie Parr, based near Lincoln, Parr started his LGV apprenticeship in April 2019 and completed it in July 2020, changing his office-based job for life on the road.

Parr encourages others to take the leap and start an apprenticeship in LGV driving: “It’s not just passing your driving test then spending your life on the motorway. There are all sorts of aspects to the job, you could go into all sorts of different industries. I’m in construction at the moment but I could go into something else and once you’ve got the  experience through your licence, there’s all sorts of opportunities for you.

“I would say absolutely go for it because it’s a win-win really, you get your license paid for and you get the experience which is hard to come by. It saves you a lot of money and saves you the hassle of trying to find a job with no experience.”

The third Breedon apprentice who chose to change career is Brad Gunby, who is based at Leeds Concrete Plant, after looking for a change from his customer service job in a supermarket. He had wanted to find a job in transport for some time as his family works in the industry and was delighted when the apprenticeship opportunity with Breedon came up in April 2019.

Gunby has now successfully completed his apprenticeship and is employed full time as an HGV driver by Breedon. He thinks others should consider HGV driving as a career path. For anyone considering a change of career he says: “Go for it. It’s been a journey to get a licence, but it opens up a lot of opportunities.”

Age not a barrier

Stewart Hook, Learning Development Manager GB at Breedon Group, is responsible for the help and support needed by learners during their apprenticeship at Breedon, alongside Seetec. He says: “In the past an apprentice has been seen as a junior, somebody straight out of school and in work for the first time. As the government is opening up apprenticeships across all levels of learning, from level 1 to level 7, an apprenticeship now has a different meaning.

“Businesses are still getting to grips with that, it’s about changing the mindset of the marketplace and showing that it is about learning new skills – an apprentice could also be at degree level. The structure of the Levy has created some barriers for the way we can fund apprentices but I think there are also some creative ways we can work with the Levy funding, it’s just a new way of thinking that is needed.”

To find out more about Seetec Outsource, go to www.seetecoutsource.co.uk

Emplas has committed to its 'Trailblazer' role with the appointment of eight new apprenticeships to seven roles before the end of this year. This...

Having started working for Contour Roofing as a young man, Jonathan Woods has gone on to buy the business - and commit to developing apprentices....

Former Apprentice To Head Up CITB

A former apprentice service engineer, Tim Balcon, will take over the reins of the Construction Industry Training Board. Balcon started out from a mining...

3B Training has become one of the most recent members of Build UK’s construction supply chain by joining as a Professional Services Member. This is...

The Foundation Of A Career

After his second-year NVQ Diploma in Carpentry Ronan Richardson has opted to pursue an additional year of studying his craft with Harron Homes and Leeds...

The trade association for the brick industry has launched a training programme aimed at upskilling candidates in a range of modern masonry...