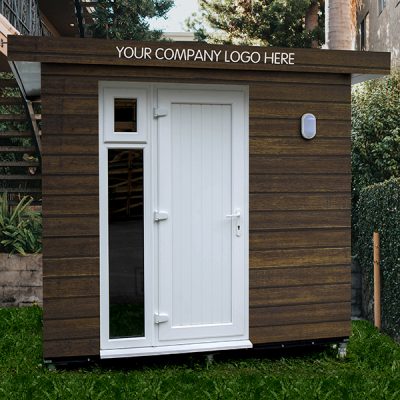 OGEL is a system that takes waste plastic and turns it into blocks to build all manner of things - including garden rooms. The firm behind it secured funding on Dragons Den with the programme airing on 8 July 2021.

OGEL, and E3 Design, both based in the North-East, alongside RAM Extrusion based in the West Midlands have developed the system to use 100% recycled polystyrene as its source material – the first ever to be globally patented.

Two of the Dragons, Tej Lalvani and Sara Davies, were so impressed they stumped up £50,000 between them for 10% of shares in OGEL.

RoofWright - a firm that designs conservatories, orangeries and garden rooms has also been impressed and is including the OGEL building blocks in its designs (RoofWright designs software for outdoor building such as conservatories, orangeries, extensions, and garden rooms.) Speaking about the involvement MD Dave Blakeman said: “As a software design company we are regularly asked to get involved with new and exciting projects and this one really resonated with us. The OGEL product fitted naturally into that group. We have created an App to enable their customers to design buildings to their own requirements.”

OGEL is offering complete buildings that are fitted with windows, doors and electrics - and even wall mounted desks with monitor supports. Clearly home offices are proving a huge growth area. OGEL's task pod comes fully finished and is mounted on  ground screws.

However, finished buildings come in different varieties from emergency shelters to be sent and constructed in disaster zones to supermarket customer or trolley shelters. There is even an OGEL doghouse on the drawing board.

But as RoofWright's involvement indicates, the building blocks can be used to create bespoke projects. So if you have a customer keen on an exterior building with the highest environmental qualities - including being more thermally efficient than a standard building - contact OGEL.

Picture: OGEL launched in June with two products, Taskpod, a home office and Garden Living a series of flexible garden buildings to enable families to maximise their outdoor area with the option to change the layout, or dismantle and transport if they move house.

Google searches for glazed extensions doubled as homeowners started to look for ways to extend and improve their homes during lockdown according to...

Leads 2 Trade is adding garden rooms to its existing range of lead type offerings so suppliers and installers can take advantage of the garden room...

An office and a garden have overtaken closeness to a station, shops and restaurants when it comes to choosing a new home, according to research...

Taggart Homes has commenced works on the first phase of 100 high spec outdoor work pods suitable for home working and even as small commercial...

Garden Rooms Delivered to Your Back Yard

Making Your Space has a dedicated garden room manufacturing facility and product range that’s been designed with the adoption of the latest off-site...

Ultraframe has recently surveyed users of its Ultraroof tiled roof to find out the top five reasons why they choose it over other systems. In prime...

A new drawing service has been launched for  conservatory roof suppliers by Giles Hayhurst, formerly of Windowlink with orangeries and garden rooms a...

With millions remote-working from home, there has been a dramatic rise in noise pollution and an all-time high in the sale of sound-insulating...

Into Infinity - Fitters Like Rooflights Straight From The Box

Demand for TuffX’s Infinity rooflights have been steadily growing amongst builders and specialist window installers thanks to the product’s...

Our House - Our Castle & Our Keep

Dr Tara Hipwood suggests that the madness associated with people living on top of each other during lockdown will change what they want from their...

On The Tiles - Time To Celebrate Boost In Interest

The record levels of interest in conservatories that first manifested itself at the end of June is a perfect fillip for installers of tiled roof systems...