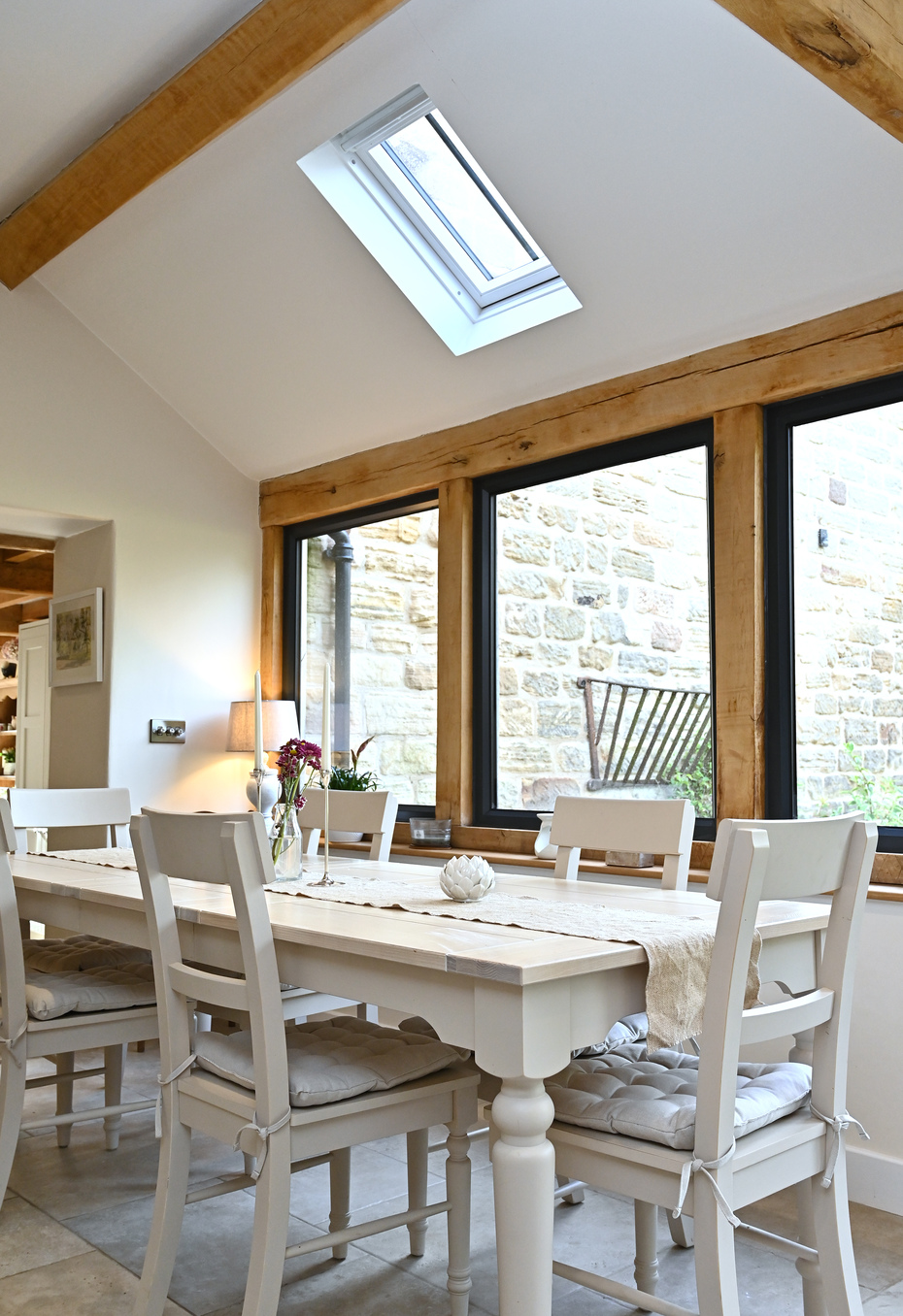 Originally built in 1775, the grade II listed converted barns and farmhouse at Elms Farm, Derbyshire is the home of the Smedleys who recently added roof windows for more light and ventilation.

Fiona and John Smedley did the conversion themselves. The property had been purchased by Mrs Smedley’s father in the 1980s.

When builder Ken Tansley from Interbuild was first introduced to the site back in May 2017, the barn was still full of old farming machinery, cow partitioning and even had ducks and chickens living in a part of it.

“As the build went on, the architects’ drawings did have to be slightly amended, as is the way with many renovations, but fortunately everything went pretty smoothly and there weren’t any major problems or changes.”

Light and heat were two large factors that had to be taken into consideration during the planning stages. The barn had little-to-no insulation, and what would become the second floor had no access to natural daylight – two common issues to tackle in a normal barn conversion but a grade II listed property would need extra care and compliance.

To accommodate this many of the upstairs’ original beams, which the owners had hoped to keep, had to be covered for insulation and fifteen roof windows were drawn into the plan to bring natural daylight into the top floor rooms.

Tasnsley first heard of Keylite when visiting Buildbase Derby and soon got in contact with Keylite’s Tom Jarvis. “Tom was fantastic, he came out to Elms Farm to meet us and bought a sample,” says Tansley. “It was an easy sell due to the price and the fact that all the flashing and add-ons came with the windows as standard, which again saved us on time and price. That, and the homeowners knew they could also get a wide range of blinds from Keylite as well.”

“Usually, roof windows can pose an issue for listed buildings, as they sit higher than the roof tiles and therefore cause compliancy issues, as well as being an eyesore,” continues Tansley. “However, another huge selling point for Keylite is that the windows are recessed as standard – meaning they sit lower in the roof, enhancing the overall appearance and improving the thermal performance of the window.”

Two years on, the barn at Elms Farm has been transformed into a beautiful rural home. Having stayed true to the building’s long history, homeowner Fiona Smedley has worked to ensure as much of the original structure is incorporated into her home as possible.

The L shaped building consists of a lounge, three bedrooms with en-suites, and a sunroom, which used to be an old pigsty, looking out into the garden. The sunroom, true to its name, invites natural daylight and warmth thanks to new bi-fold doors and two Keylite roof windows.

“There is no attic in the barn, meaning the second floor is literally in the roof. Skylights or roof windows were the obvious choice to help bring natural light into the upstairs rooms,” says Fiona Smedley. “Four of our hard-to-reach Keylite windows are electric, which definitely saves us from having to reach with a pole every time we want some fresh air, or when it rains.

“The three bedrooms all have two Keylite roof windows and each en-suite has an added one. The light that the windows bring in is wonderful and really helps to enhance the beauty of the property. We love it here.”

Picture: The Grade II listed converted barns and farmhouse at Elms Farm, Derbyshire where Keylight roof windows have been installed.

£Multi-Million Contract Flies Through The Skylight

Velux Rewards provides vouchers redeemable at what is left of the high street once Covid is done and online. Extra value is given on special promotions and...

Sky TV has been running adverts for Velux roof windows since June 8. The three month campaign is aimed at young couples and families. The ads show...

Kick It With Keylite Challenge Rolls Out Nationwide

Keylite is challenging its UK merchant partners and friends to #KickItWithKeylite, in the name of raising £30,000 for three fantastic...

To support merchants and installers, UK based manufacturer of roof windows Keylite is offering free online product demonstrations. As the industry has...

News Is Key for Keylite

UK based manufacturer and roof windows specialist, Keylite Roof Windows, has launched a quarterly newsletter for industry professionals involved in the...

Polycarbonate for All The Leading Rooflights

Allowing natural light into homes is a big selling point which is why Novolux, a polycarbonate sheet supplier, has partnered VKR Holding to offer four...

German firm Kaspari recently completed a school renovation which helped make best use of space and improved ventilation to minimise the transmission of...

A games company has a new Sunderland HQ embracing industrial architecture while using state-of-the-art SageGlass technology for shading and a comfortable...

All Aboard The Skylight

Trade fabricator Modplan has just added the Leka Systems Skylight to its portfolio. The skylight is fully glazed unit with a neatly finished surround that...

Nottingham Trent University's new centre for enterprise and innovation has become the latest higher education facility in the UK to feature cladding...