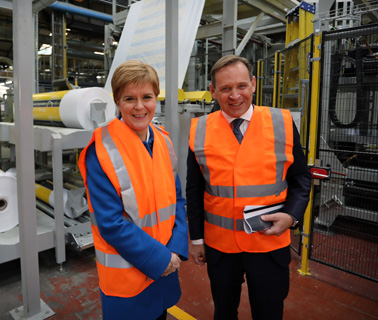 The opening followed the completion of a £37 million project to redevelop Superglass’s production facility, protecting 180 jobs at the site and cementing the company’s place as a leader in Scotland’s manufacturing sector.

On the visit, the First Minister toured the new facility, seeing how the newly installed 187-tonne furnace and curing oven, cooling, cutting and milling equipment has facilitated a doubling of the site’s production capacity. She also addressed staff and declared the new factory open.

The multi-million-pound investment is one of the largest in Scottish engineering and manufacturing in recent years and was supported with £477,000 of Scottish Enterprise grant funding.

“We are following through on our commitment to expand our manufacturing operations in Stirling, and the tens of millions we’ve invested is a real vote of confidence in both our industry and in the wider Scottish manufacturing sector.”

Redevelopment of the Superglass factory is a commitment from the company to maintaining its Scottish base, from which it will now produce around 60,000 tonnes of environmentally sustainable glass wool insulation annually.

The significant engineering and building works within Superglass’ existing site were carried out while the original production area continued to operate. During the construction process, Superglass reported its return to trading profit a year ahead of forecast with revenue growing from £23.6m in 2017 to £32.9m in 2018, a 39% increase.

Ken Munro, CEO of Superglass and its parent company, Technonicol International for Western Europe & North America, said: “It’s was an honour to welcome the First Minister to the factory to officially open the new, state-of-the-art production facility.”

Sturgeon said: “This new facility is testimony to the commitment by Superglass to Stirling and Scotland, not only creating new jobs, but securing the future of the site and its talented workforce.

“This plant is an example of the skilled, low carbon industry which is so crucial to Scotland’s future, and I am pleased that it has been supported by Scottish Enterprise.”

Glass wool insulation produced by Superglass is made from up to 84% recycled glass and is estimated to save around 300 times the amount of energy used to manufacture it.

An intensive programme of factory upgrades following a site move to a former Barbour warehouse has seen composite and PVC-U panel door manufacturer,...

Morley Glass & Glazing has taken six new Luton vans to boost its delivery of Integral blinds capacity and greatly increase the amount of glass it can...

B&P Windows has said that it will take all its post-consumer glass to Morley Glass to be put through Morley's on-site glass crusher. Since 2019,...

Specialist safety glass manufacturer, TuffX, has expanded its factory in order to ramp-up production of its increasingly popular Infinity rooflights and...

When Time Is Tight, Think TuffX

A single-storey property in Scotland was given a high-end exterior finish against the clock, thanks to glass supplied in double-quick time by TuffX. The...

No Strife In Fife

A simple yet elegant glass balustrade with toughened glass has been installed without fuss in a private residence in Fife. The project completed a...

Using a high level of recycled and organic materials, new EcoMAX is claimed to be the country’s most environmentally friendly glass unit. Clayton...

Morley Glass & Glazing has achieved a 35% increase in production of its sealed units with integral blinds inside compared to pre-lockdown manufacturing...

Glass is helping to build a new highway to sustainable buildings, homes and roads thanks to scientists based in South Yorkshire and 27 European partners...

FIT Show – CRL Glass Rooms And Checkatrade Both Check In

Checkatrade is set to make its debut at FIT Show while CR Laurence will return to the event at Birmingham’s NEC 10-12 May to showcase its glass...

The Terry Healy Group has bought Custom Build Solutions, an all-trades building & home improvements company with its base in Edinburgh. Custom Build...

Manufacturing output is still struggling to keep pace with demand and JobAdder has warned the sector is balancing on a skills tipping point, with the Great...

Aero Healthcare’s has created the first natural fibre, biodegradable wipe in 100% recyclable packaging and is focusing on the construction sector for...