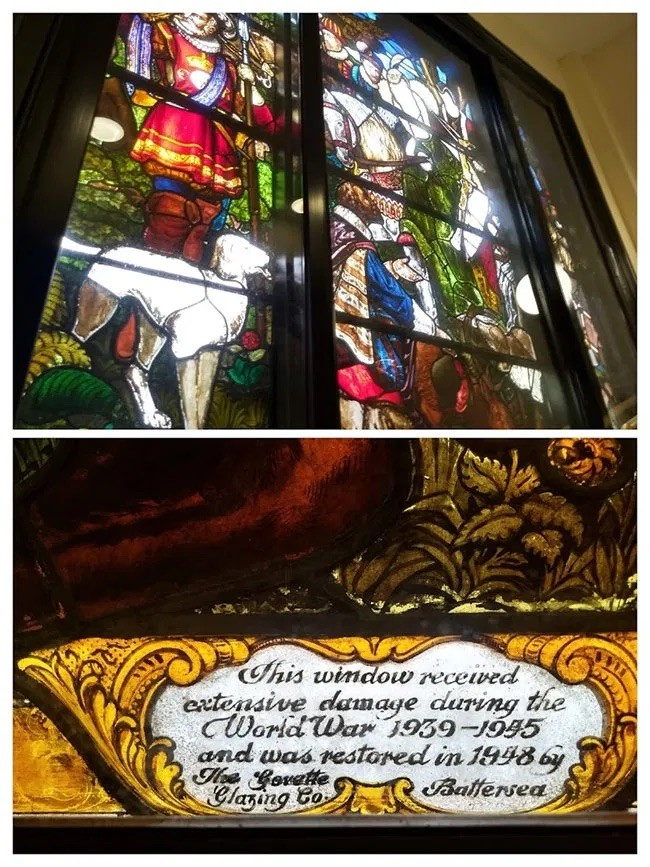 Stained windows provide a view into history but one might chase down an epic story if a closer look is taken. A depiction of the Epping Hunt revealed an unknown about Govette Windows.

This stained glass window pictured here can be seen on the staircase at the Royal Forest Hotel in Chingford, Essex. It shows Queen Elizabeth I and her court taking part in the Epping Hunt. One panel reveals an intriguing connection with Govette Windows a member of the Steel Window Association.

The link was made by Arthur Johnson who was researching the hotel’s history and noticed a panel stating: 'This window received extensive damage during World War Two and was restored in 1948 by The Govette Glazing Co. Battersea'.

Johnson subsequently contacted Govette Windows to find out about any relationship with the present company.

Darren Lloyd, managing director of Govette Windows, explained that Govette originally had a director called Fred Hancock whose family history went back to the Huguenots.

“Fred, along with a Mr Lea, set up the company and named it Govette – the family name when they were in Europe. Fred's speciality was glasswork, stained glass and leaded glass and he established a small workshop in the basement of 1 Park Hill, Clapham; it is not clear why the window’s inscription mentions Battersea.”

At the time, Govette specialised in glasswork but as the company diversified into steel window and door manufacture, the glassworks moved, eventually becoming Warner Glass which is still in Croydon. Lloyd’s father worked for Govette Metal & Glass Works, originally as a draughtsman and then as a director.

Govette Windows, as it became, has been supplying and installing steel windows and doors since 1996. Based in South Godstone, Surrey, all its products are purpose made so they can be manufactured to match existing windows and doors or to a unique design.

The four-storey, 60 bedroom Royal Forest Hotel was originally known as the Forest Hotel but was renamed after Queen Victoria visited Epping Forest in 1882. Following a serious fire in 1912, it was rebuilt, minus the top floor. Today, the building is run by Premier Inn and Brewers Fayre.

Picture: This stained glass at the Royal Forest Hotel in Chingford, Essex.

Steeling A Match At The Brewery

A vibrant brewery in London, Hackney Church Brew Co,  has been given the steel star treatment by Steel Window Services & Supplies. The company...

Noma Estate In Manchester Gets A Touch Of Steel

Associated Steel Window Services has been involved in the restoration and conservation of timber and steel fenestration throughout Quadrant Arcade, a Grade...

A major redevelopment, inspired, conceived and developed by The Hartley Group, has been completed. This is part of the strategy to regenerate Hartley's...

Associated Steel Window Services has recently completed the refurbishment of the windows and doors for Hackney Town Hall in East London. Hackney Town...

Capital & Centric just purchased Weir Mill in Stockport with a view to converting it into 250 flats in a £60 million project. The firm's...

Nottingham Trent University's new centre for enterprise and innovation has become the latest higher education facility in the UK to feature cladding...

Originally built in 1775, the grade II listed converted barns and farmhouse at Elms Farm, Derbyshire is the home of the Smedleys who recently added roof...

Sheerline - As Seen On TV

Clarke Calls For Cancellation - No To VAT On Refurbs

TV personality and architect George Clarke has urged the government to help power a global retrofit revolution by abolishing VAT on the restoration and...

If you were a bit of an ageing hippy living in Pontefract, you would definitely be declaring ‘wow, hey man’ if you saw (or didn’t see)...

Ox Architectures popped two things into the heart of its project to rebuild the Jean Peyraud elementary –  SageGlass dynamic glazing and the...