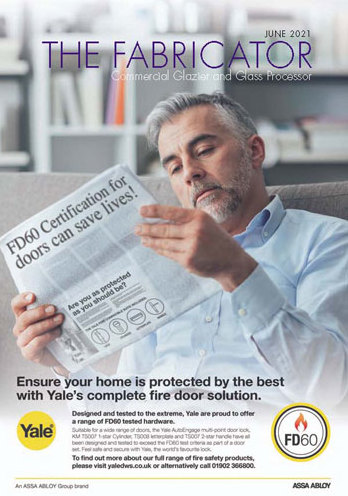 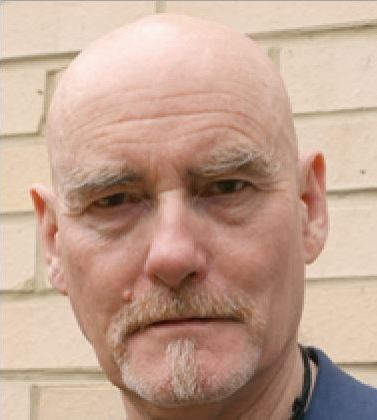 The Fabricator Editor, John Roper, looks at the topic of wellbeing and in particular prostate cancer. Still too many men don't talk to each other about health issues - and they don't go to the doctor. John's advice - if you are worried, speak sooner because later might be too late. To Read More - Click The Pic

Marketing - From the ground up 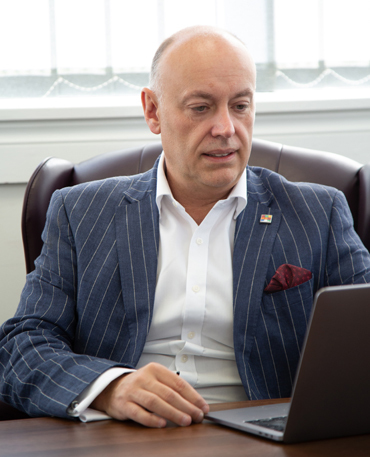 As the UK moves towards economic recovery, it’s time to build. Andrew Scott, MD of full service marketing agency Purplex, discusses why now is the perfect time for ambitious businesses to look forward to shape their future for years to come. To Read More - Click The Pic 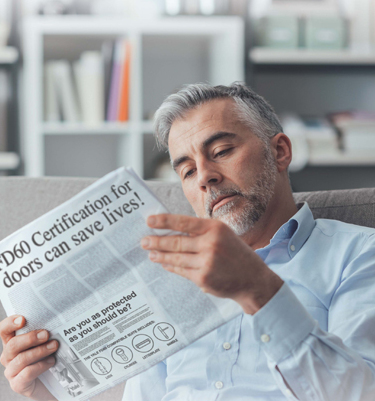 The hardware element of a fire door is an integral part of its effectiveness. Yale offers a range of products that have been tested to meet the FD60 fire door specification in residential, commercial and public buildings. To Read More - Click The Pic

Health & Safety Matters - What works for all? 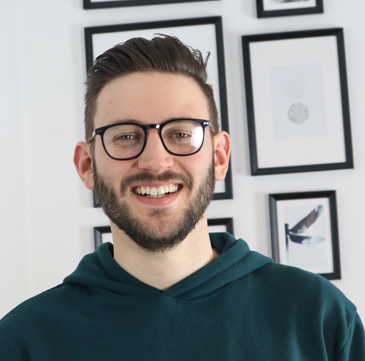 The GGF promotes the highest standards in all things including health, safety and environment, writes GGF H&SE expert James MacPherson. However, work is complex and dynamic and with a diverse membership base it can be a challenge to cover all the issues. To Read More - Click The Pic

Security Hardware - Equipped with us 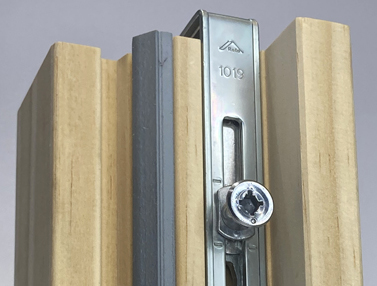 From a catalogue of over 7,000 window and door fittings, distributor Carl F Groupco ensures that all the front line needs of fabricators are catered for. According to Carl F Groupco, fabricators can rest assured that their hardware needs for all profiles are addressed whether aluminium, timber or PVC-U. To Read More - Click The Pic 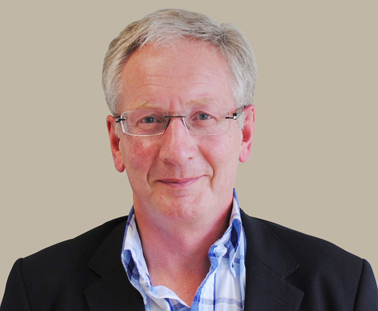 UK door and window hardware manufacturer Winlock Security has strengthened its product offering with the introduction of the ICAM locking system. To Read More - Click The Pic 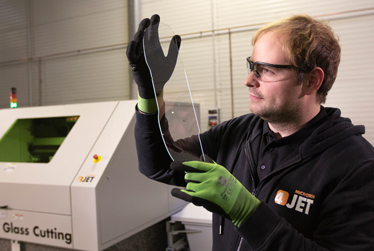 The 4JET Group of Alsdorf, Germany, has introduced new versions of its Pearl laser glass cutting systems developed to cut ultra thin glass. The Pearl M-UTG system is integrated in a fully automated processing line and can cut glass foils as thin as 30 μm. To Read More - Click The Pic 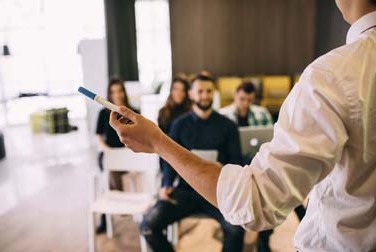 Not many decades ago people became skilled in a trade such as joinery, plumbing or glazing, by becoming an apprentice. A skilled person passed on their knowledge over a period of a few years to create the next generation of skilled craftspersons, writes Phil Slinger. To Read More - Click The Pic 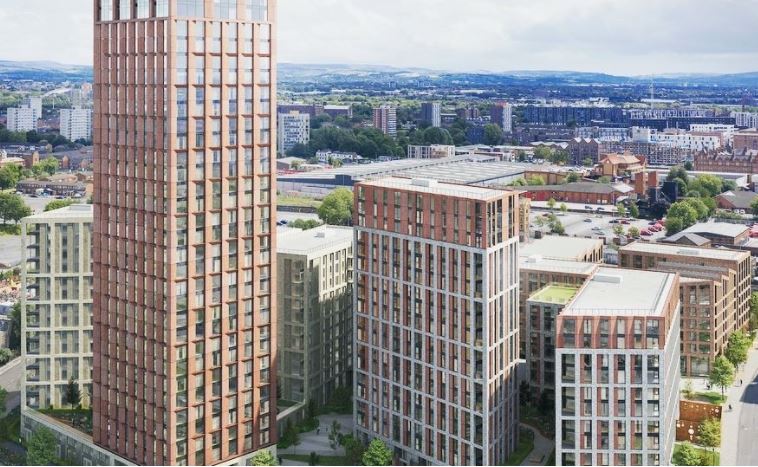 Manchester’s £400 million ‘gasworks new town’ scheme has gotten the green light for 1,200 homes. The neighbourhood is one of seven envisioned by the £4 billion Victoria North masterplan.

The project will feature nine buildings ranging from 8 to 34 storeys on a 6.6-acre site has most recently been home to a car park. The green development will overwhelmingly prioritise walking and cycling over driving.

Those involved claim It will result in tens of millions of pounds being pumped into the city’s economy over the lifetime of the development.

MCR Property Group is leading the project on the site of the former Rochdale Road Gas Works at the heart of Manchester, with a mixture of attractive townhouses and apartments.

MCR bought the site in 2015 with big plans to use it as the launchpad to rejuvenate the immediate area with a mixed-use destination development. The team, working with local stakeholders and the planning department, went through dozens of iterations to get the balance of housing provision, design and environmental amenities in balance. It received approval by Manchester City Council’s Planning Committee on 3 June 2021.

The scheme will be built in four phases with construction set to begin this summer, while the tallest residential tower is expected to be completed by the end of 2030.

Architects, AHR, included 1,224 cycle spaces as part of a determined effort to encourage more people to walk and cycle and help reduce the amount of traffic on local roads. Where there is underground parking, bays will have electric charging points for the next generation of environmentally friendly vehicles.

The Victoria North masterplan, formerly known as the Northern Gateway Strategic Regeneration Framework, will see the entire area north of the city centre transformed over the next 20 years by the delivery of 15,000 new homes across 383 acres.

Nick Lake, Asset Manager for MCR Property Group, said: “This is the jewel in the crown for MCR. We’re a Manchester based business and we all felt a responsibility to create something spectacular on home turf. We’re particularly proud of the project’s environmental credentials."

Sir Richard Leese, Leader of Manchester City Council, said: “As one of the emerging neighbourhoods of Victoria North, New Town is aptly named. The Gasworks development will breathe life into a largely forgotten corner of the city centre fringe, bringing purpose and an energy to an area that is currently characterised by surface car parks."

Matthew Hard, Associate Director at planning consultancy WSP, commented: “We've reached the important milestone of having Manchester’s planning committee endorse the proposed redevelopment of the historic gasworks. Gasworks New Town will be a fantastic development in its own right and act as a catalyst for further regeneration of the post-industrial Irk Valley."

Dan Barnes, Regional Director at architects AHR, added: “AHR Architects are very pleased to have had the opportunity to lead the design team for this very exciting new development. The Gasworks will deliver a major new, vibrant and sustainable residential neighbourhood effectively extending the city centre and forming a significant part of Manchester’s Northern Gateway regeneration plans, delivering a range of high quality homes and generous new landscaped public realm."

Big players have seen their proposals for a total of £1 billion worth of building, including 1000 new homes, in Manchester passed by the...

This Way Darling To New Eutopia

Planning permission has been achieved for Darling Associates’ latest residential scheme in Salford which will achieve 500 build-to-rent...

A deal has been done to build more than 1,550 homes on the former Ford Dagenham car works in East London, however, this will be dwarfed by the 25,000 homes...

National Express, better known for its bus services rather than property development, is the name behind a new 2,000 home scheme in Birmingham. Working...

Oldies To Chase The Dragon In Wales

J.G. Hale Construction has started to convert the former Blue Dragon Hotel that will have over-55s in Cardiff chasing the 49 new apartments; and a...

Taggart - There's Been A Builder

Building works on a new housing development in West Oxfordshire, by developer Taggart Homes, are progressing on track. The show home set to open to the...

A Mucky End As Plans Go Wayward In Wandsworth

The 1,103 new homes which were part of the London Borough of Wandsworth's Alton Estate regeneration plan are now in jeopardy as Redrow Homes has pulled...

Capital & Centric just purchased Weir Mill in Stockport with a view to converting it into 250 flats in a £60 million project. The firm's...

Homes England has acquired 19 sites in the last financial year worth £180 million. The land has the capacity for 5,000 new homes across the...

Meet Down By The Water Again Some Day

Planning permission has been granted to the second phase of the Grand Union masterplan, which overall will create a new community with over 3,000...

Keystone’s brick slip feature lintels have successfully balanced the traditional with the contemporary as part of the Station Approach...

First Base Gets To First Base With Bristol City's Soapworks

Developer First Base has the go-ahead for the new £175 million Soapworks district in Bristol. The City Council has resolved to grant planning...