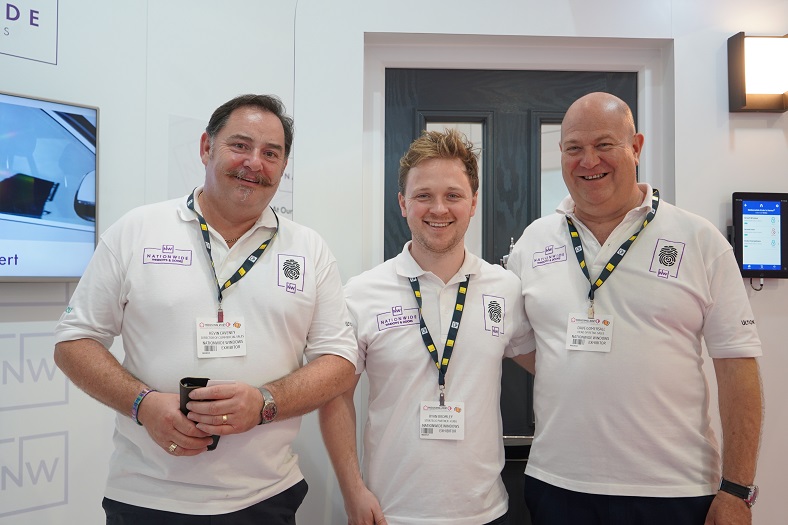 The team from Nationwide Windows put their smartest pants and corporate t-shirts on for the Housing annual conference and got loads of enquiries for smart-sensor technology in windows and doors.

Nationwide was exhibiting in collaboration with Kabu the smart sensor and locks firm.

The conference is organised by the Chartered Institute of Housing. It was held in Manchester 7-9 September. It returns to Manchester 28-30 June.

Held over three days at Manchester Central, there were over 6,000 attendees, 350+ speakers, and 350 exhibitors including Nationwide Windows at the event. Housing 2021 was described by the organisers as a must-attend event for local authorities, housing associations, key partners and suppliers, government, housebuilders and developers.

Nationwide Windows theme of 'making windows & doors smart' showcased a number of products on their stand that work with Kubu smart-sensor technology. This included the new Kubu window lock range with shoot bolt and standard security espagnolettes and importantly, was the first public preview of the new Kubu window smart-sensor.

Additionally it was an opportunity for Kubu to present the ‘Kubu Connected Home’ philosophy with Nationwide Windows and the partnership opportunities open to housebuilders, local authorities, housing associations and other specifiers in the sector.

“This was the first public premier of the new window smart-sensor. It was important to be able to speak to influencers at the sharp end about our vision for a Kubu connected home in the future.”

Kevin, Caveney, commercial director of Nationwide Windows who was part of the conference team added: "We already have an idea of how a smart future will look like with Kubu but the response from the show was overwhelming. The opportunities for us are considerable as we look to embrace the smart home market through commercial specifiers. They’re hugely interested in becoming part of this smart revolution too and we’re already engaging with a number of potential suitors."

Picture: Nationwide made a smart debut at the CIH show.

Visitors can't wait to sate their appetite to attend the FIT Show as visitors gobble up pre-reg tickets and numbers hit a high of 130% above the...

FIT Show organisers have confirmed that over 75% of space has now been allocated for its new May 10-12, 2022 dates. The fenestration industry’s...

The FIT Show organisers have announced the September 2021  exhibition will be abandoned with the event moving to May 2022, in response to the ongoing...

Smart Ready and SAC Hardware have confirmed that they will be bowing out of FIT 2021 in September. Smart Ready had taken a huge amount of space spread over...

The FIT Show will see over 40% of its exhibiting brands making their exhibition debuts. Brands including Rockdoor, Exlabesa, Solar Calibre, STORM Building...

Supply Chain - As Strong As Its Links

Giovanni Laporta of Smart Ready has written an open letter in which he says the whole supply chain is duty bound to look after one another so that...

FIT Show has been postponed - but only until September. The flagship UK fenestration event was due to kickoff in May but will now come to Birmingham's...

Liverpool Going For Double and Triple

With double and triple glazing on the agenda, the Low Carbon Homes Liverpool online retrofit conference goes live on Tuesday 19 January to consider how to...

F5 For Fresh At Fit

Composite door supplier Doorco will be at FIT Show 2021 with the company's biggest stand to date and many fresh things to share - why not plan to step...

Deceuninck is not the first to find Fenex an attractive option but it has joined the virtual exhibition series as another launch partner. Described as...

Installers Are Pushing To Take Up Fabrication

Andrew Scott, industry consultant and CEO of Insight Data, has predicted a big increase in installers turning to fabrication to beat supply chain...