£1,000 And Bubbly For Balustrade Snapper 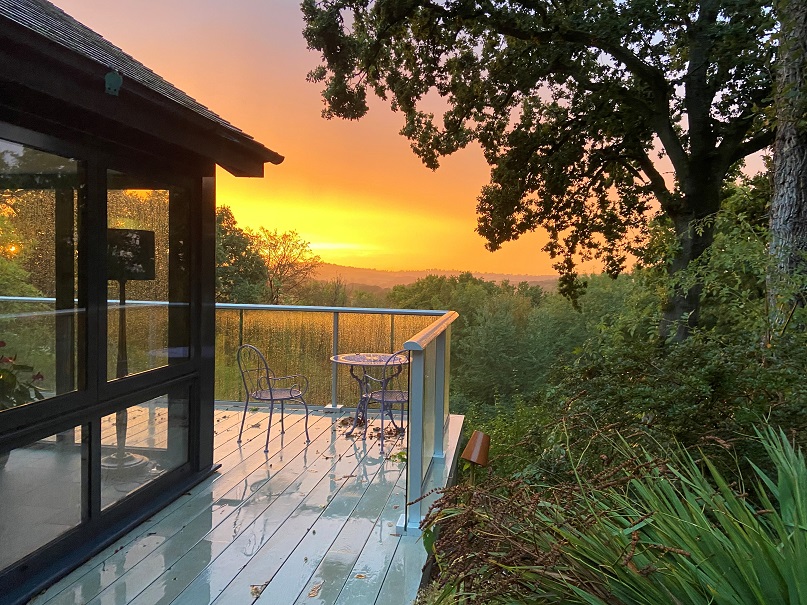 Glass balustrade maker Balconette had an impressive response to its annual photography competition. The winner was Graeme Jones in Kent's High Weald area, who won a £1,000 cash prize along with a bottle of bubbly.

More than 500 buyers of Balconette balustrades and Juliet balconies entered photographs of their installations, with entries ranging from smart-phone snaps to serious amateur photo studies.

The winning entry shows a fiery summer sunset from Jones' balcony, with the hills of the Weald in the distance. It beat off strong competition from entrants, all tasked with showing the benefits of a modern glass balcony.

Entries came from all corners of the British Isles and, according to the judges, demonstrated considerable photographic skill and an eye for natural beauty.

Jones' glass balustrade, installed by Balconette’s Registered Installer Timbertech Southern Ltd., gives him his own outdoor space to enjoy the spectacular view. He took the photo on the spur of the moment: "I usually like to walk around the garden each evening if I can and I stepped out of the back door shortly after a rainstorm had passed to see the amazing sunset. I had my mobile with me and I simply stood back and took the picture, it wasn't composed in any way, it was just as I saw it.

"When I was told I had won the overall competition for the year I just couldn't believe it," added Jones. "I feel very lucky. I'm pleased that if the deck area had been finished with anything other than a glass balustrade, the photograph just wouldn’t have been the same."

Balconette, which specialises in high-quality glass balustrading, has provided glass installations for several high-profile buildings including the Tate St Ives and the Battle of Britain Memorial Centre near Dover. Alistair Gillies from the company told The Installer and The Fabricator: "We love to help homeowners create their own space. We thought Graeme had used his balcony area to enhance the view and managed to express this in his photo".

Balconette's Head Office is in Blindley Heath, Surrey. The company has a network of registered outlets and Installers across the country.

A large split-level terrace has been surrounded by glass panels. The panels obviously provide fall protection but they also do not intrude on the stunning...

Oh What A Feeling To Go From Floor To Ceiling

Reynaers' Hi-Finity now has the ability to stretch from floor to ceiling and wall to wall, spanning the whole of a building’s...

May The Skyforce Be With You - Juliet Balcony Launched

More developers are using balconies at the centre of projects according to Rehau which has just launched Skyforce into its window portfolio. Lockdown,...

A manufacturer & retailer of windows, doors, home extensions and conservatories will make a £500,000 investment to increase capacity - following...

The Only Way Is TuffX

Specialist safety glass manufacturer TuffX recently supplied 15sq.m of toughened glass panels for a balustrade  at a residential property in Essex. It...

Reynaers is making it easier for members of its new Partner Network to attract leads with a new homeowner customer online hub that provides advice on...

Following continuing growth in demand for its toughened safety glass products, TuffX has purchased another new Bovone SLE machine. This is the third...

Aluminium windows from SAS have helped create a warm and welcoming accommodation scheme for the students of Arts University Bournemouth. Senior...

Everything Unfolding At AluFold - Selling Tools Are Tops

AluFold's new factory is set to open soon but much has been done in advance with a new brand and a new website to help communicate the scale of the...

Origin has launched the OS-29 Patio Slider claimed to be the slimmest semi-dry glaze system in the UK. The OS-29 offers another sightline option...