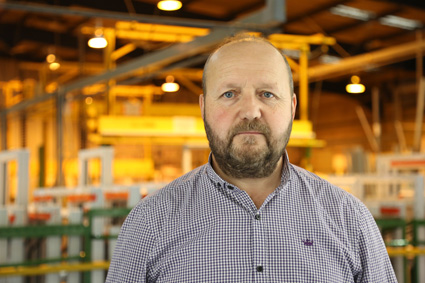 Shelforce's Howard Trotter says raising awareness of the role of fire doors is a hot topic to him and his company whilst Yale has confirmed its commitment to Fire Door Safety Week.

Trotter is the Business Manager of Birmingham based window and door manufacturer Shelforce. He says not only should the role of fire doors be recognised, drawing attention to issues such as poor installation and maintenance is critical.

“The last few years have brought a much-needed wake-up call on fire safety, not just for the fenestration industry, but for the construction industry and society more generally. And rightly so – as they can be the difference between life and death.”

With Fire Door Safety Week set to take place from September 21-27, Trotter says more understanding is needed to make sure a fire door performs as intended. Shelforce's Trotter continues: “Fire doors are not ordinary doors - they are a carefully engineered fire safety device and are critical to the fire safety of a building. Product manufacture, quality, installation, and maintenance are all life critical. After all, everyone plays their part in ensuring a fire door performs as it should.

“Raising awareness and encouraging building owners and users to check the operation and condition of their fire doors is vital, which is why Fire Door Safety Week is so important,” adds Trotter.

Earlier this year Shelforce, which specialises in providing PVC-U and aluminium products to local authority building projects, launched its new fully compliant Fireshel 30-minure fire, smoke, and security resistant door. The company is planning on offering a comprehensive fire door package with its Fireshel system, ranging from fabrication through to installation, maintenance, and repair.

Following its commitment to fire safety in residential, commercial and public buildings, Yale has pledged its support to Fire Door Safety Week for the fourth year running.

Fire doors are one of the most fundamental elements of a building’s passive fire protection, acting as the first line of defence in a fire and providing those vital minutes for occupants to evacuate the building safely.

With this in mind, Yale has created a full suite of hardware to collectively exceed 60 minutes protection against fires. Yale’s AutoEngage multi-point door lock, KM TS007 1-star Cylinder, TS008 letterplate and TS007 2-star handle were collectively fitted and tested on a 54mm door with Lorient’s intumescent seal, passing the test requirements of BS 476-22:1987 and exceeding the FD60 time test by an additional 25%.

This doorset assembly now allows architects, specifiers and OEMs to be FD60-compliant, helping to defend buildings against the spread of fire.

Brett Evans, Technical Director for Door Hardware at Yale DWS, says: “This suite of hardware far exceeds the FD60 test, further reinforcing our responsibility to our fire door safety commitments. Each product can make a critical difference, as without these seemingly small pieces of hardware, the effectiveness of a fire doorset can be significantly reduced.

“Over the past year we have seen some great progress in fire door safety. Following the Dame Judith Hackitt review in 2018, we can already see a change in attitude towards the critical importance of fire door safety. We hope that by supporting Fire Door Safety Week year on year, the initiative will highlight the issues surrounding fire door safety and move the industry forward.”

Launched in 2013 in response to a legacy of fire door neglect, Fire Door Safety Week is a campaign to increase public understanding of the vital role that fire doors play, managed by the British Woodworking Federation and supported by several partners, including the Home Office’s National Fire Safety campaign, the National Fire Chief’s Council and London Fire Brigade.

One supplier with a range of fire door locks, latches and hinges has spoken out in the wake of findings that 60% of fire door maintenance, replacement and...

Halspan, Arnold Laver and Lorient are to host a series of free webinars in support of Fire Door Safety Week which runs 21-27 September...

Yale has supported Fire Door Safety Week for the fifth year running, underlining the company’s commitment to fire door safety and security. The...

Shelforce has received its first major fire door order – with 210 set to be supplied and installed in three blocks of retirement and sheltered...

Yale Door and Window Solutions has successfully tested a number of its products to meet the FD60 fire door specification as part of a commitment to...

Abloy UK has published the dates of its 2022 Academy Foundations and Foundations Plus CPD courses in emergency and panic escape compliance – and...

Made It - Shelforce On ITV's Made In Britain

Birmingham window and door manufacturer Shelforce will feature on ITV’s much-loved Made In Britain TV series on 22 April - so watch it live or on...

New World Developments Ltd, which includes Apeer Doors, Lumi Windows and Isolate Fire Doors, has announced its decision to reopen on Monday 4 May with a...

The Association for Specialist Fire Protection has partnered with an insurance broker to offer a new Professional Indemnity Insurance Cover Scheme for...

Enhancing a fire door or curtain with a transparent vision panel should be considered in an attempt to assist both fire wardens and fire fighters says...

City of London Splashes Out On Fire Doors For 7,000 Tenants