Made It - Shelforce On ITV's Made In Britain 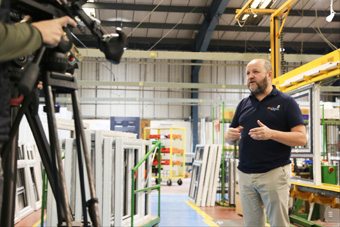 Birmingham window and door manufacturer Shelforce will feature on ITV’s much-loved Made In Britain TV series on 22 April - so watch it live or on catchup on ITV Hub.

The company, which specialises in providing PVC-U and aluminium products to local authority building projects, including Birmingham City Council, will feature on episode 5 on ITV4 at 8:00pm.

The show tells the story of British production and some of the country’s best loved products and is narrated by actor Ricky Tomlinson. The episode will be available on the ITV Hub for 30 days after.

The behind-the-scenes spotlight will focus on the company’s production processes and its inclusive approach to employment and will include interviews with staff on what working at Shelforce means to them.

Shelforce, which employs some of the city’s most vulnerable people, with 75% of its workforce disabled, welcomed camera crews to its Erdington based factory in October.

“There has been a real buzz around the team since we received the date when we will feature on Made In Britain and we’re all looking forward to watching it on April 22.”

“It was fantastic that the producers of the show chose to tell the Shelforce story and it’s a great opportunity for us to show what we do and for the team to get the recognition they deserve,” adds Shelforce's Trotter.

Series Producer Rob Kelly says: “Made In Britain is not just about the products, it’s about the stories behind them and Shelforce provides a truly inspirational story to tell.”

Trotter also hopes that the feature will shine a positive light on the fenestration industry. He adds: “The industry has a certain perception in the general public’s eyes, yet these are engineered products - they keep us warm in the winter, fire doors protect and keep us safe and most people don’t realise how these products are made and the processes they have to go through before they come out of the factory. Hopefully, this programme will change that.”

Shelforce has received its first major fire door order – with 210 set to be supplied and installed in three blocks of retirement and sheltered...

Fastener specialist Rapierstar is providing extensive support to window and door manufacturer Shelforce to streamline fastener usage. The move will...

One supplier with a range of fire door locks, latches and hinges has spoken out in the wake of findings that 60% of fire door maintenance, replacement and...

Shelforce's Howard Trotter says raising awareness of the role of fire doors is a hot topic to him and his company whilst Yale has confirmed its...

Accessibility - Getting Closer And Closers

The challenge of finding the right balance between safety and security and the need to make buildings accessible for all users is a little closer thanks to...

Yale has supported Fire Door Safety Week for the fifth year running, underlining the company’s commitment to fire door safety and security. The...

Kolorseal has been supplying colour coated products to one of the UK’s largest manufacturers of PVC-U door panels, Hurst Doors, for over 13 years....

Andy Jones has stepped down as Group Managing Director at Victorian Sliders, to 'pursue new opportunities' whilst citing a reluctance to relocate...

Paul Nicholls, a well-known figure in the house building sector has just launched his own company - Real. The firm already has some tasty contracts after...