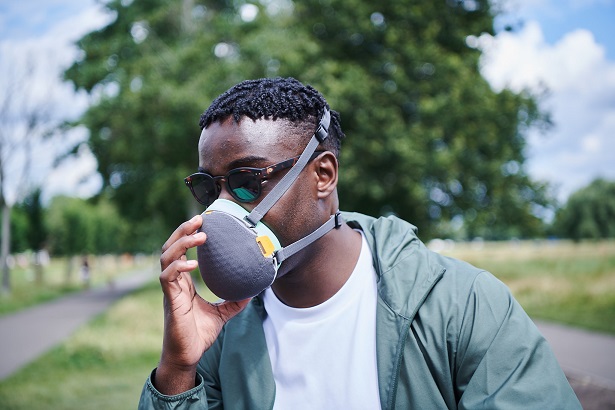 With outside workers in cities facing poor air quality, the founders of an anti-pollution mask are raising awareness of a new study saying pollution reduces sperm count by causing inflammation in the brain.

The data has further spurred on the three University friends to educate men in particular on the direct dangers of the invisible threat of air pollution, particularly in large cities.

The study, which was conducted by scientists at the University of Maryland School of Medicine (UMSOM), suggested 'a specific kind of neuron associated with the sleep cycle was responsible for the reduced sperm count due to air pollution'.

“When we heard about this new study conducted by researchers at UMSOM, we were frankly shocked at what the data revealed. As three men who have spent years commuting in London and being exposed to pollution from cars, buses and bikes just to get to work each day, the study hit very close to home.”

“Air pollution isn’t taken as seriously as some other issues as you can’t physically see it, which means it’s easy for people to forget about. This study and the hundreds like it, highlights how we cannot keep hoping it will go away. We need to take action now for the future of our children and grandchildren and in the meantime, make sure we take steps to adequately protect ourselves and reduce the risks.”

The Airhead mask, which was founded before the pandemic to protect wearers from city pollution, is the brainchild of active and outdoor enthusiasts Harry, Alex Smith and Elliot Denvir, who enlisted the help of a team of researchers and scientists from Brunel University. The Airhead mask combines personality with real, research-backed innovation and is capable of blocking PM2.5 particulates from the air, as well as tiny particles down to 0.3 microns in diameter.

Crucially, the Airhead mask features a TPE seal to ensure no air leakage, as well as rear-facing valves to quickly move hot air away from the face. Although designed specifically to protect the wearer from city pollution, the mask also comes with exhalation valve blockers, to make it suitable for use as a Covid face covering in crowded places.

In 2020, Airhead became an award-winning member of the NatWest Entrepreneur Accelerator and won a government-funded competition to help it expand in India. Following this success, the company launched its Kickstarter campaign in April, with its target of £30,000 achieved in just four hours and a total of £315,511 raised overall, emphasising the demand for pollution protection.

The Airhead mask is available in three colour options (blue, grey, and black) and comes with two filters, a carry bag and exhalation valve blockers.

Motivating staff and maintaining a happy workforce is now a top priority for more than one in two small business owners according to new research from...

A study by Westfield Health asked 1,500 people across the UK about their future work plans and wellbeing needs. They wanted to understand how the workforce...

The GGF has produced a Digital Marketing Toolkit to help members promote their businesses. It consists of 12 modules supported by video tutorials and...

Covid Burnout - Managers Feel Like Quitting Under The Strain

More than six in ten UK managers have experienced burnout at work because of Covid-19, with a fifth considering quitting their job as a result. This is...

Skeleton Crew Is An Installer's Mate

MATE-XT is Comau’s new rugged yet lightweight exoskeleton for indoor and outdoor use. It aims to reduce biomechanical risk for workers whilst...

The UK’s leading addiction treatment specialist, UKAT, has launched a new programme aimed at helping those working in the Building & Construction...

May The Skyforce Be With You - Juliet Balcony Launched

More developers are using balconies at the centre of projects according to Rehau which has just launched Skyforce into its window portfolio. Lockdown,...

New research has revealed that one in five SME owners are working an additional three hours daily on average to manage the impact of the Covid-19 pandemic...

Mates in Mind Appeal & How To Be Kinder To Yourself

Mates in Mind has published a call for donations to its Covid-19 Relief Fund. Meanwhile, Jonny Benjamin writes about self-compassion and living with the...

London's Outdoor Workers Are Breathing More Pollution Than Most

New research shows outdoor workers in London are exposed to 15% more pollution than the average. 'We are building the evidence base that proves...

The London Medical Laboratory says people waiting for their booster should consider taking a finger prick antibody test – especially as, when it...